If you have preschool aged kids that are learning prepositions, then you will love this treasure hunt preschool activity!  It took us 5 minutes to make the clues, and my 3 and 4.5 year old had so much fun! The inspiration for this came because I wanted a fun way to practice finding things.

See, we have noticed when I’ll give my oldest directions to go find something in the house, he wasn’t quite sure what we were asking.  Under the coats, over there by the door, below that shelf, you get the idea. So to make it fun here’s a Treasure Hunt that your kids may beg you for often! It’s the perfect interactive preschool activity for a pretty wide range of kids. I’m sure older kids would love it just as much if not more!

What you will need for this treasure hunt:

Prepositions to practice with your preschooler

I know this may sound stupid but I actually had to look up prepositions really quickly before writing this. It’s been a long time (say middle school?) since I “officially” learned them for the last time! It’s funny how you can use them everyday when speaking and forget what they are actually called.  So I’ve made a cheat sheet for you.

Use this list when coming up with where to hide your clues for this treasure hunt preschool activity! Just imagine you are giving your kid instructions to find something and write that down. 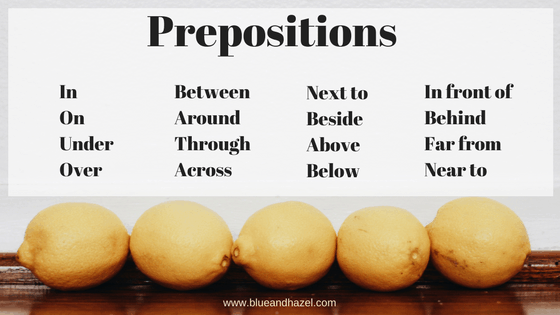 How to make this treasure hunt preschool activity

Step 1: Write the clues with prepositions on a popsicle stick or sticky note.

Step 2: Tuck each into it’s own envelope, or if you use paper fold it in half. You totally don’t need an envelope but I think it makes each clue a little easier to find and we had them around already.

Step 3: Have kids go play in a room while you hide clues.

Step 4: Hand them the first envelope with clue and then they will find them all! Having two kids that were both racing around competing made it so I ended up having them take turns.  They would find the clue and take turns opening it, and then I’d read it to them and off they’d go. It was a super fun preschool activity and they have been asking for it again and again!

Step 5: Give a prize for finishing!

Related Post: How to teach preschool at home: Getting Started 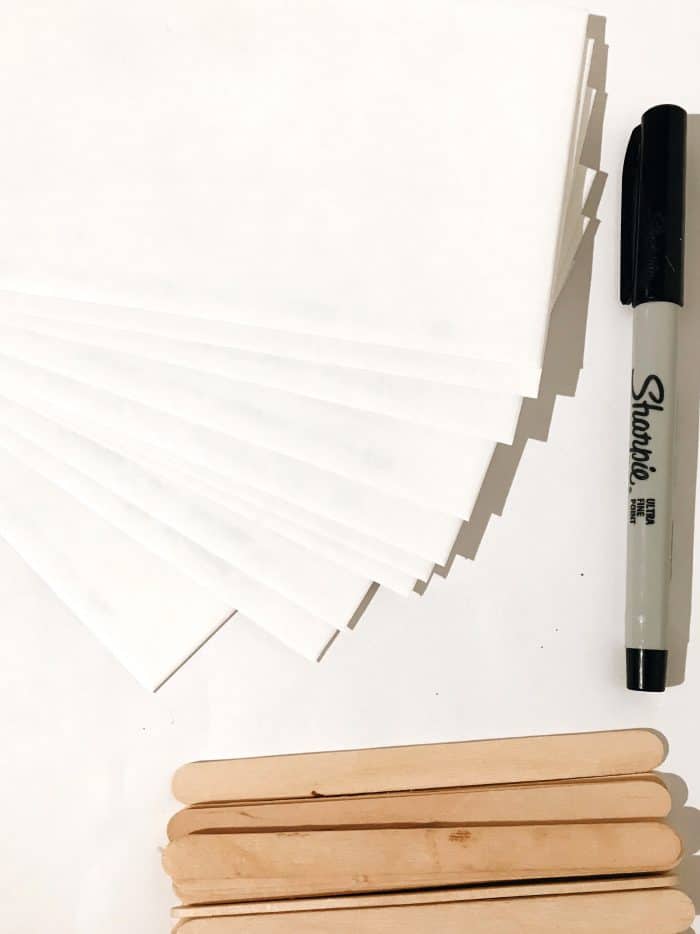 Check out some of these clues! Feel free to use these exact ones. With the ages of my kids, I couldn’t make them too tricky. You could even shorten the clues to one preposition per clue. And it would be just as simple to write these on a piece of paper or sticky note if that’s easier. 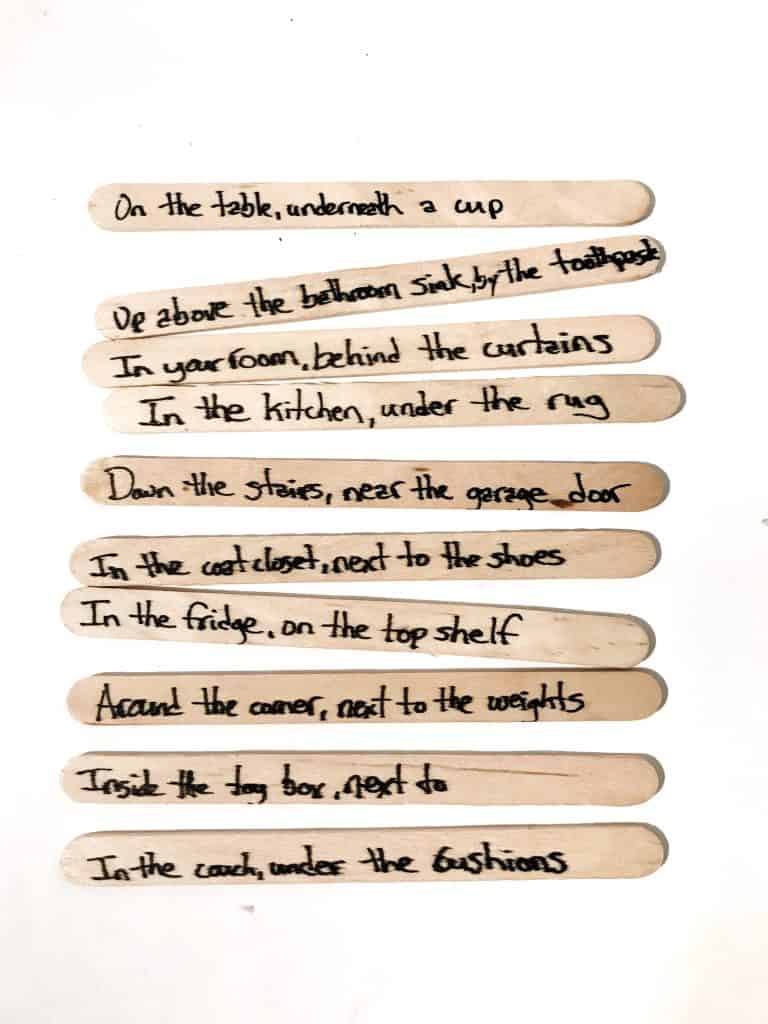 Just write down clues on paper or popsicle sticks, hide them while the kids go into another room, and you have the easiest preschool treasure hunt set up.

The goal of this treasure hunt

For my kids, it was to find the treasure at the end. For me, it was to plan a movement activity while combining something we needed to work on.

What I really wanted to practice was looking for something in a specific spot.

My hope is that this will help them to quickly find something in another room later, like their socks. Or a fresh diaper mom has stashed in the closet up high.

Definitely don’t overthink it, just write clues for ordinary places. For instance, we were trying to get one of my kids to find their shoes the other day at the bottom of the stairs, and one of us had to go down and get them, even though they were right where we said. That’s when I realized we need some preposition help here! So one of my clues said , down the stairs near the garage”.

The outcome and what I would do differently

Finding the clues was the most fun part for them, and it goes fast! They found them all within 5-10 minutes. Next time, I will definitely write out more clues to make it last longer.

A tip I thought of after the game ended: To make it last longer and make them run around more, you could plan the clues better than I did. For instance, next time I may alternate an upstairs clue with a downstairs clue each time so they have to go up and down the stairs 5 or 6 times (or back and forth from opposite ends of the house).

You may also love: 20 Best Bath Toys for Toddlers 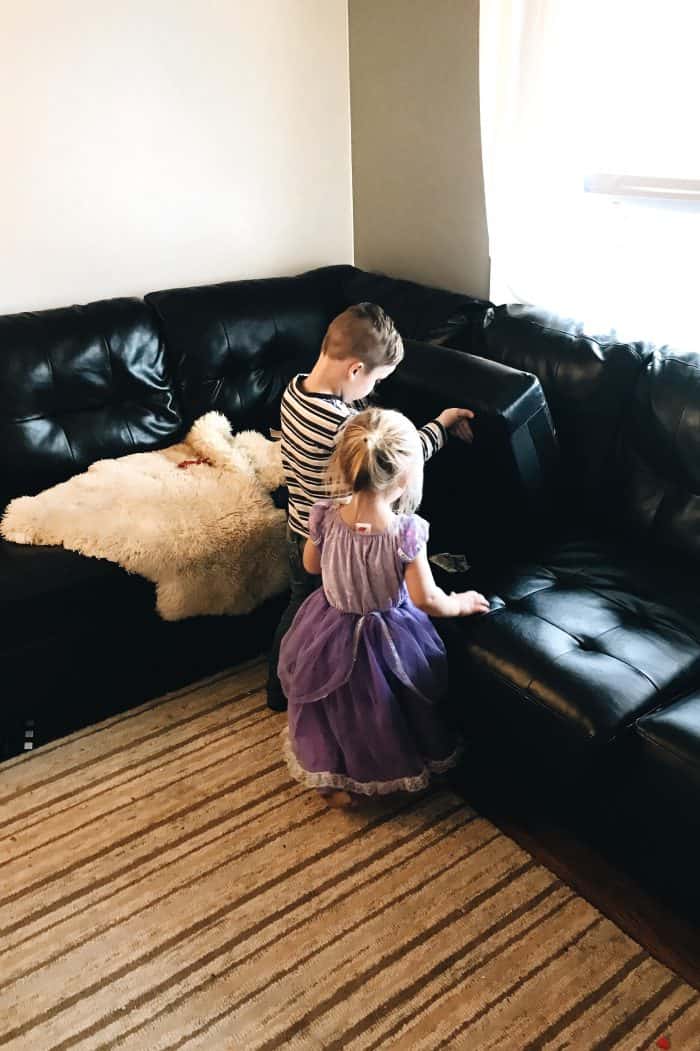 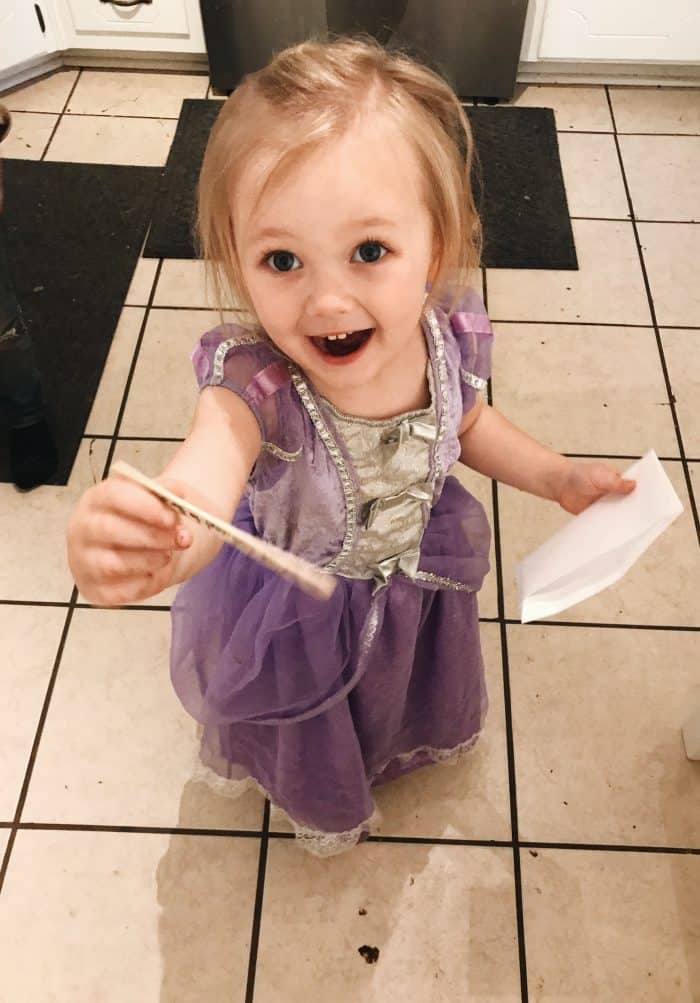 I treated them to candy, but you could obviously do anything else. Some ideas I am thinking of for doing this again since I don’t want to do candy every time would be: 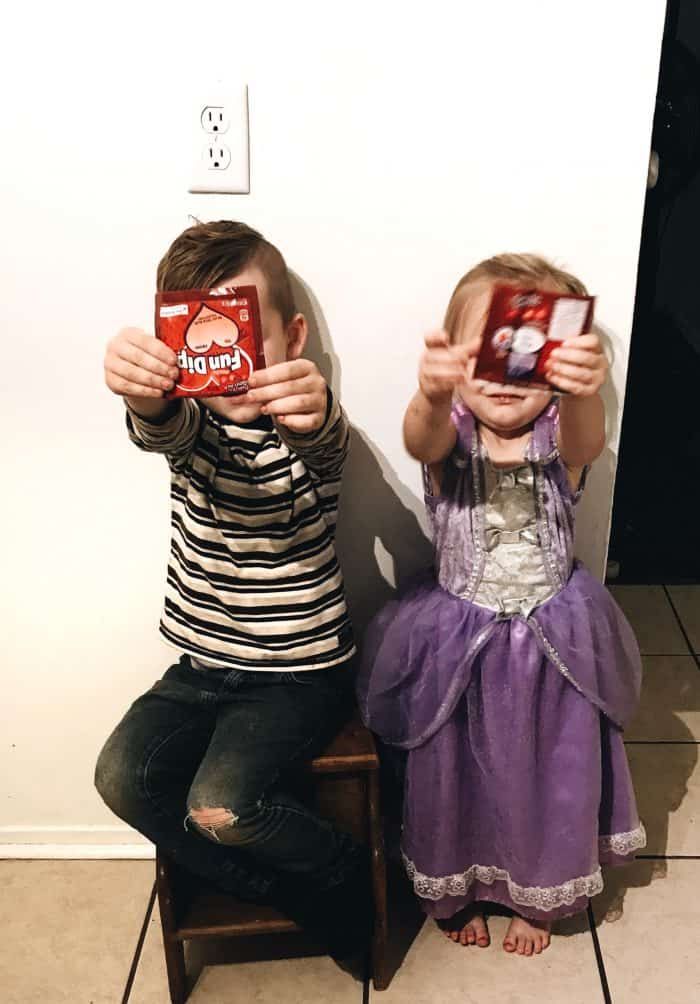 There’s nothing like a little sugar at the end of a treasure hunt. Next time I’ll make sure to plan the clues so they have to run up and down the stairs a few more times though! What an easy preschool activity.

Do a treasure hunt outside too

Today was pouring rain all day, but I think we will do this again outside where the kids have to run around longer to find each clue. I know they would zip all over from one side of the house to the other and I could hide things in the mailbox, under rocks, and inside of bushes. I think it would be a lot harder!

Have you done any fun preschool activities lately? I’d love to know because we are in the market for some new ones. But really, try this treasure hunt preschool activity and don’t forget to pin for later!

You may also love:

How to teach your preschooler to write letters

Easy crafts for toddlers from a non crafty mom

Yes! I love to see posts about ways to make learning interactive and fun. I have seen Seek and Find worksheets like this, but you killed 3 birds with one stone in this. 1.) Teaching prepositions 2.) Getting kids moving and busy 3.) Fun!

So many people think that homeschool has to be expensive, hours and hours spend hunched over a desk, repeating conjugations in monotone, but it’s hardly ever that. With a little ingenuity, research, and a little trial and error, it can be life changing for parent and child.

Thank you Ali! I'm glad you liked this easy preschool activity. And yes, homeschooling can be a lot of fun for both parents and kids with just a few added activities and some preparation! There are lots of ways to teach one idea.