When it comes to making Pho, I want to feel like I am eating at my favorite restaurant. My obsession began when I was pregnant with my second, and Pho sounded really amazing when nothing else did. Even with morning sickness which is crazy.  At $8-$10/bowl I had to learn to make it myself if I wanted to eat it regularly!

So, the obsession carried through till I got it how I liked it, and now we make huge pots of this broth on a regular basis. If you want to know how to make Pho at home, all you need are the right ingredients and about 4-5 hours to let the broth just cook.

How to make authentic beef pho at home

Every Vietnamese street vender or household makes it a little differently. YouTube, lots of recipe comparisons, and to be honest it took about 3 times making this to get it how we like it. What is important is that you like the broth. If you don’t know what it “should” taste like, go to a restaurant and order a bowl to see one version of what it perhaps “should” taste like.

We like our broth pretty salty, I like the flavor of the fat that most Vietnamese skim off the top, and I cook lots of meat because I hate getting to the last few bowls and not having that yummy slow boiled meat left. So have fun, and ask for help at your Asian food market to find the ingredients!

4 hours minimum to bring full flavor to the broth, more if possible for fullest beef bone flavor. I find after about 5 or more hours tastes the best as more of the beef bone dissolves into the broth. 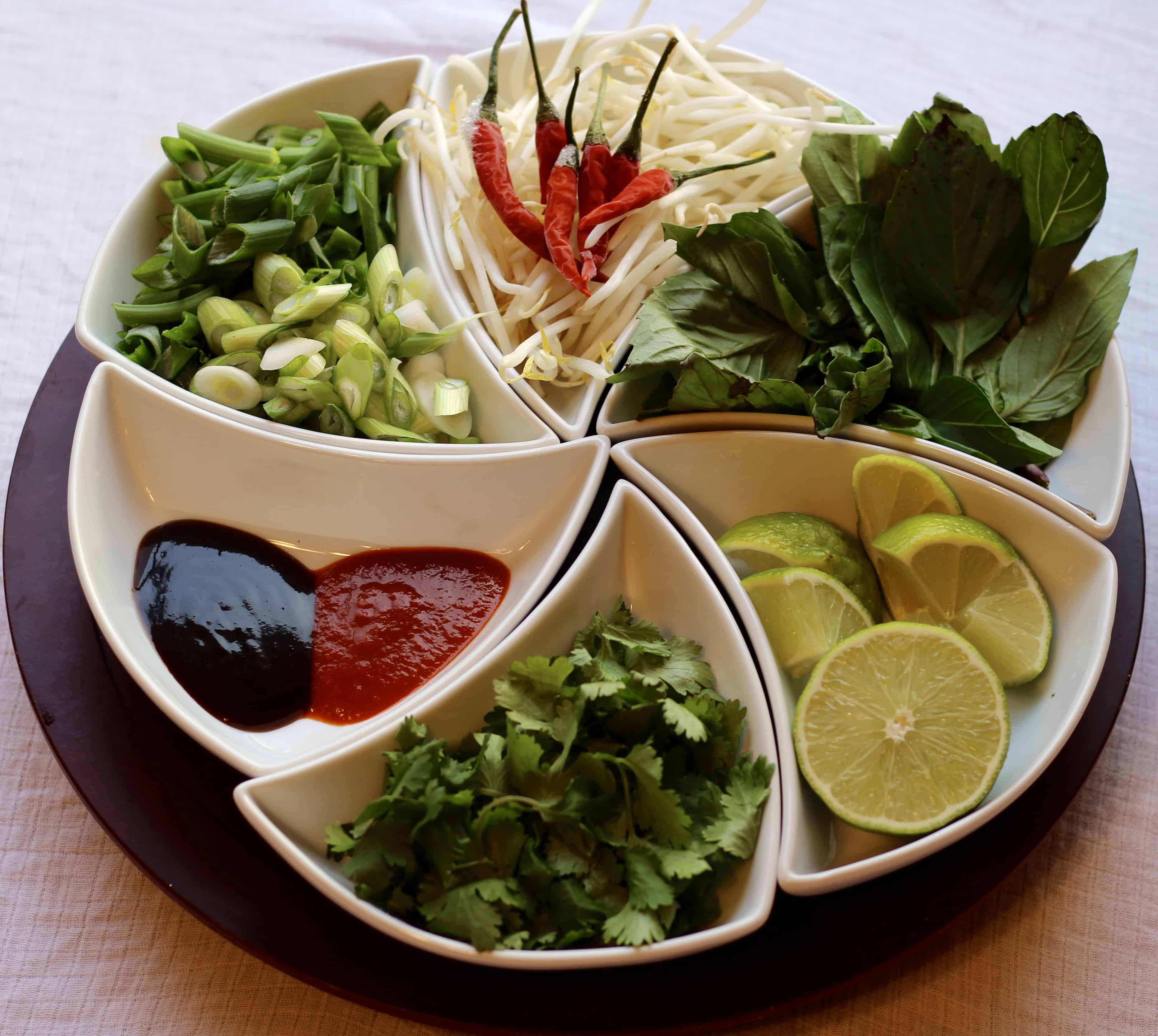 All the toppings, ready to be placed over hot prepared rice noodles. This is best done in advance.

Fill pot with enough water to cover all beef bone & brisket. Boil for 10 min. Dump everything into the sink and rinse scum off of bones & the sides of the pot. Refill pot full of water, boil again, and add brisket & bones back in. I had no idea how much scum comes out of the beef bones so this will keep your broth much more clear looking (very desirable for pho), and less skimming off of scum later. 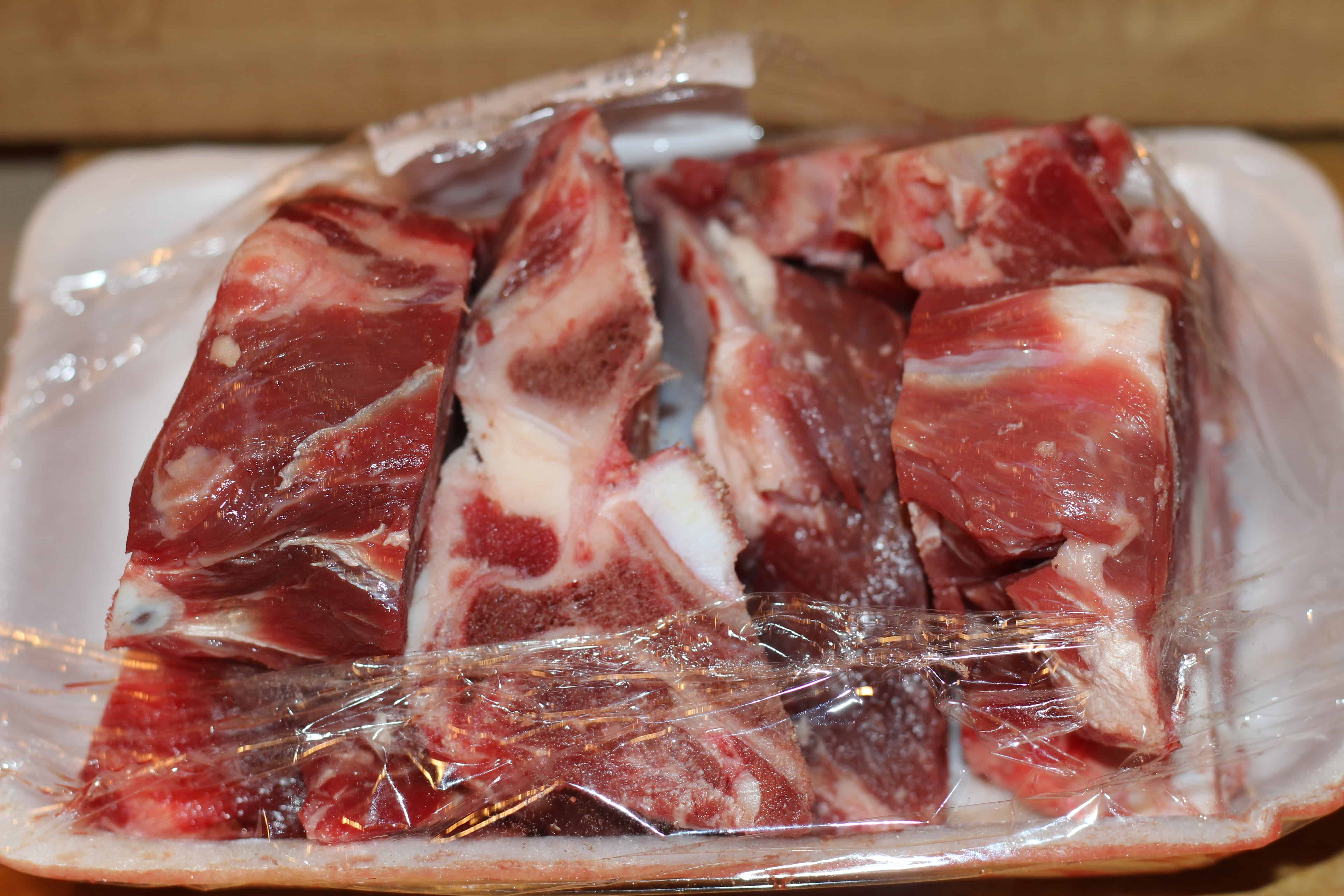 Tough cut of meat, look for sales to save money on making pho. Meat is the most expensive part. I often use bone in chuck roast because it goes on sale a lot, and if this hunk has a bone in it I will leave out the beef neck bones. 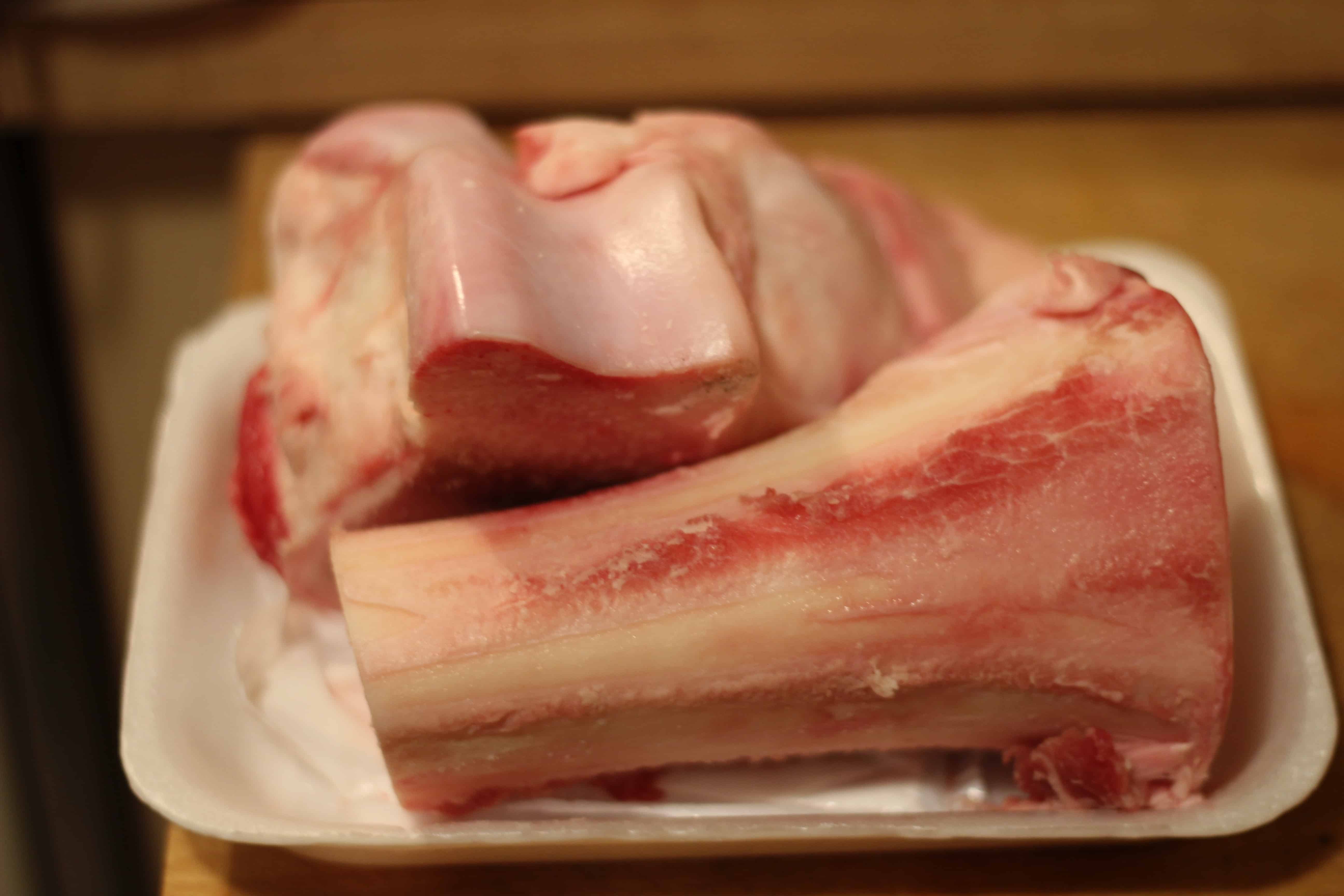 Beef Bones, easily available in freezer section of a typical grocery store. These are cheaper than beef neck bones. They don’t have any meat on them but lots of flavorful marrow. In pho, usually two kinds of beef bones are used. 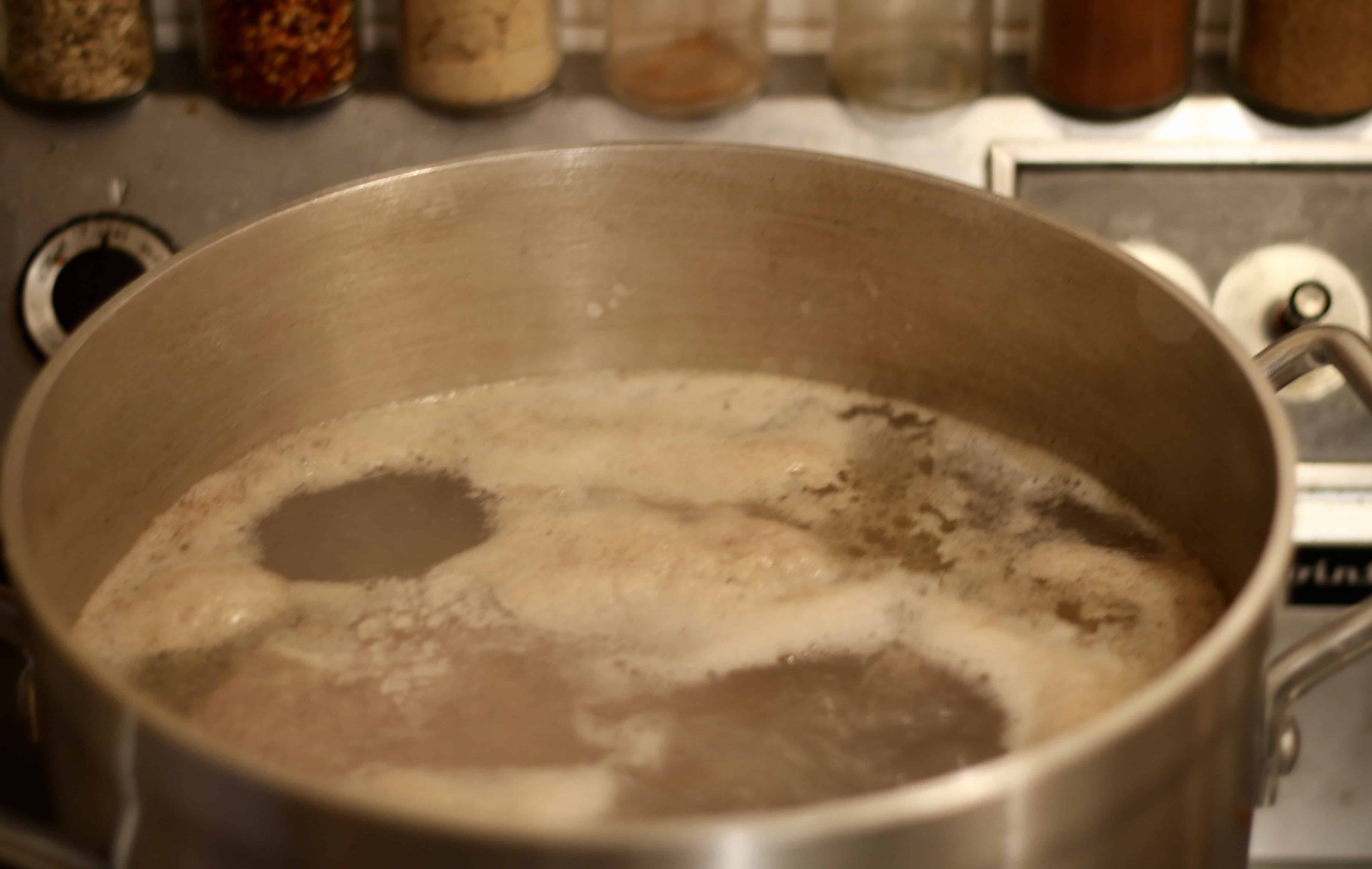 This is the scum I dumped after 10 minutes.

Rinse off scum and place back in pot full of new water.

Step 2: Char the ginger and onion

Slice ginger & onion and char them till slightly blackened. Then throw into pot. Confession: I skip this step…at the expense of the flavor of my broth because my broiler is from the 1970’s and does not work, and I do not have any open fire in my kitchen like a gas stove.

However every Vietnamese pho pro will first char their ginger and onion for fuller, deeper flavor. Street vendors tend to roast it over open fire, and in a house you can throw them under the broiler on a cookie sheet for about 10 minutes until browned, flipping so all sides char. This really makes it taste better! My broth is still yummy but every shortcut is a step down in my opinion!

Step 3: Dry roast the spices before adding to broth

Open spice packet and place all bigger pieces in a dry pan on medium heat.  This only takes a couple of minutes. Shake pan or flip bigger spices, till browning begins and you will smell this amazing aroma!

Transfer spices from pan to the included muslin bag in your spice pack, then add the smaller spices to empty pan and cook one or two minutes until fragrant. Add those to the muslin bag and tie shut. I do these separately because my first pho attempt I dumped all spices into the pan and the larger pieces barely blackened while the smaller pieces began to burn.

Pho spice packet from Asian food market. Includes a mesh bag, all for about $2. 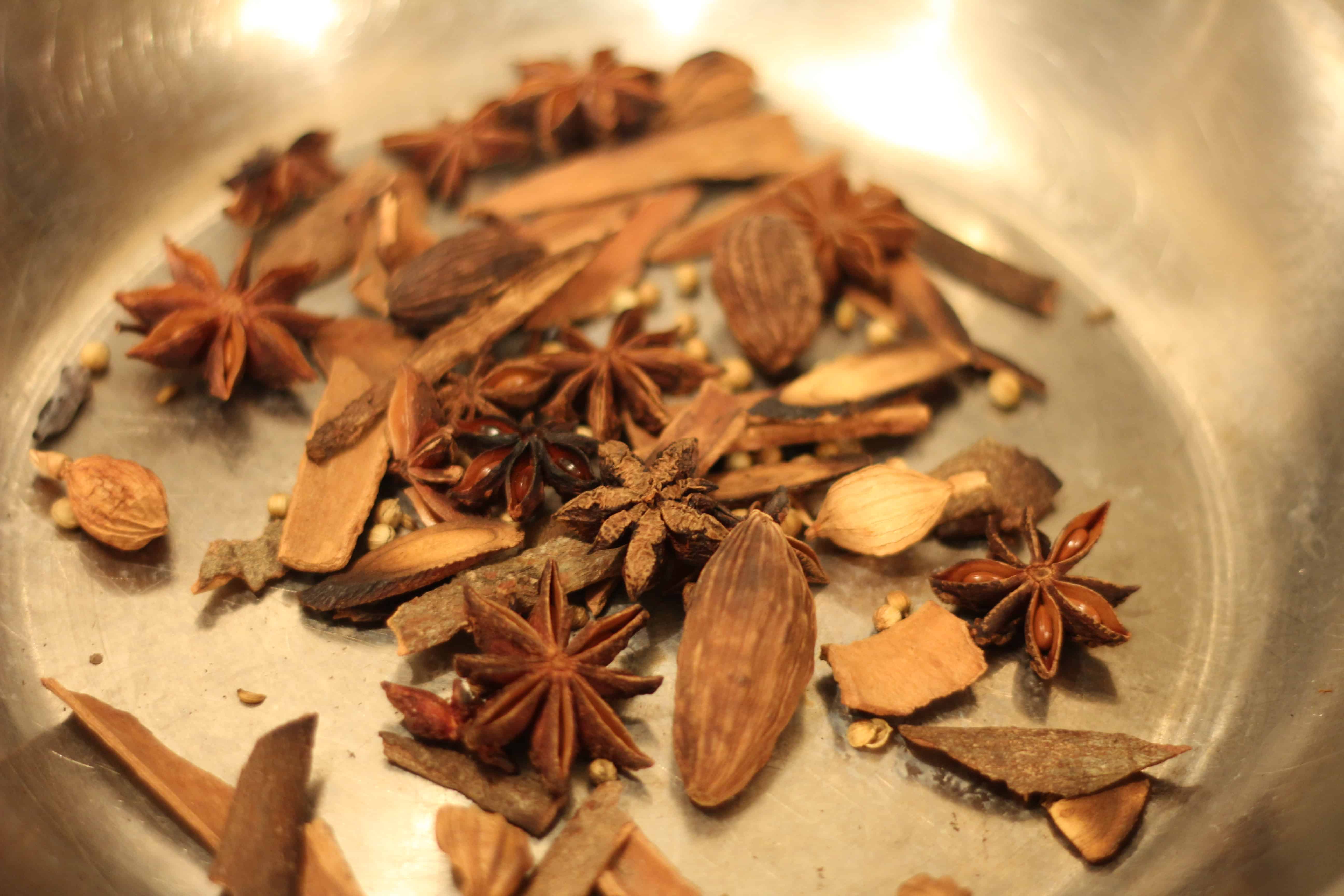 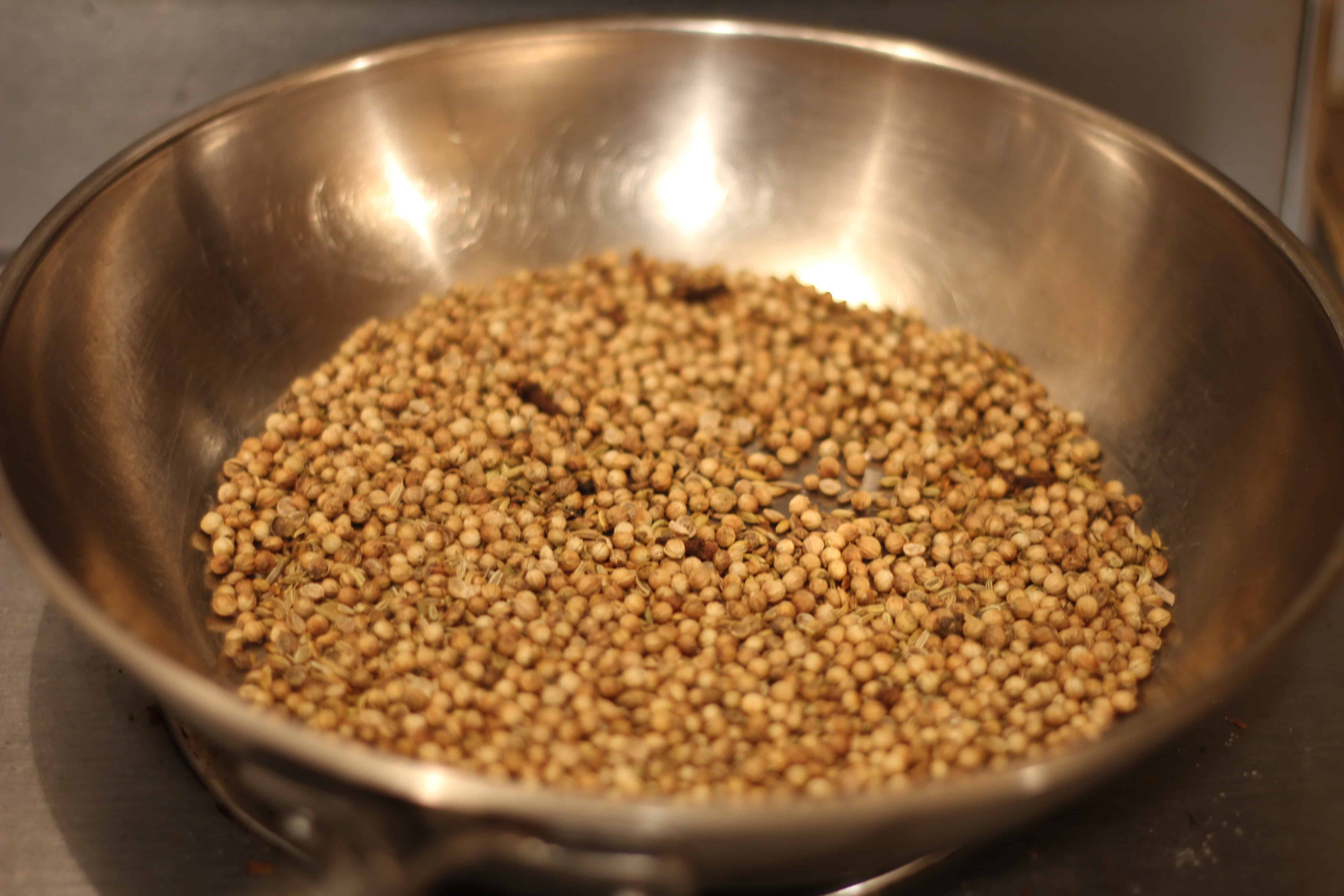 Coriander seeds, fennel, and clove dry roasted next. Add all to mesh bag once fragrant.

Step 4: Remove hunk of meat for later so it does not overcook 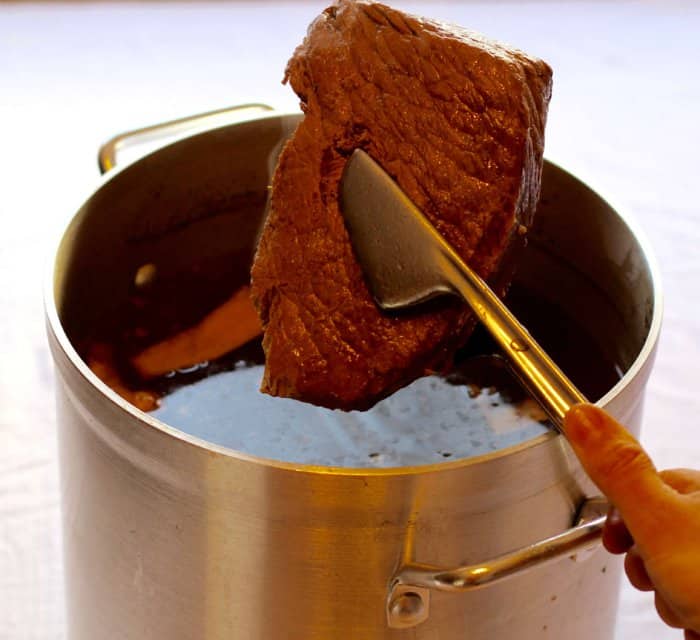 Remove meat cut after about 2 hours or until tender and slice for later. It will taste amazing!

Let cook on a low boil for 2 hours, and then remove hunk of meat. I thinly slice it and put it away till serving hours later. I have mistakenly let the meat cook for 4+ hours and it can get overly dry. Still tasty, but a more crumbly texture.

Continue cooking broth with bones and spices for minimum of 4 hours, up to 8.  The longer I have cooked the soup, the more bone marrow melts out, and flavors the broth. If you have less bones, more cooking time will do you well for maximizing beef bone flavor. Once the meat hunk is out you can always add more water to the pot giving you more broth.

At end of cooking, at least 4 hours in, add rock sugar chunks, fish sauce (a very salty ingredient and huge part of pho flavor), and salt.  I have added these in the beginning and notice no difference, however you adjust salty and sweet flavor at the end so its just easier for me to do it all at once.

I asked the ladies at the Asian food market what fish sauce they use at home ( I assumed they steer away from low quality cheap fish sauce which supposedly tastes fishier). They pointed me to Three Crabs fish sauce, easy to spot because the sticker has three crabs on it.

I knew it was good because some random guy saw me holding it and said, “thats the best fish sauce ever!” Anyways, don’t smell it, just dump it in. Trust me, it smells gross. And if it splashes on your counter, paper towel it up and toss, don’t touch the nasty stuff! Its magical and gross at the same time. 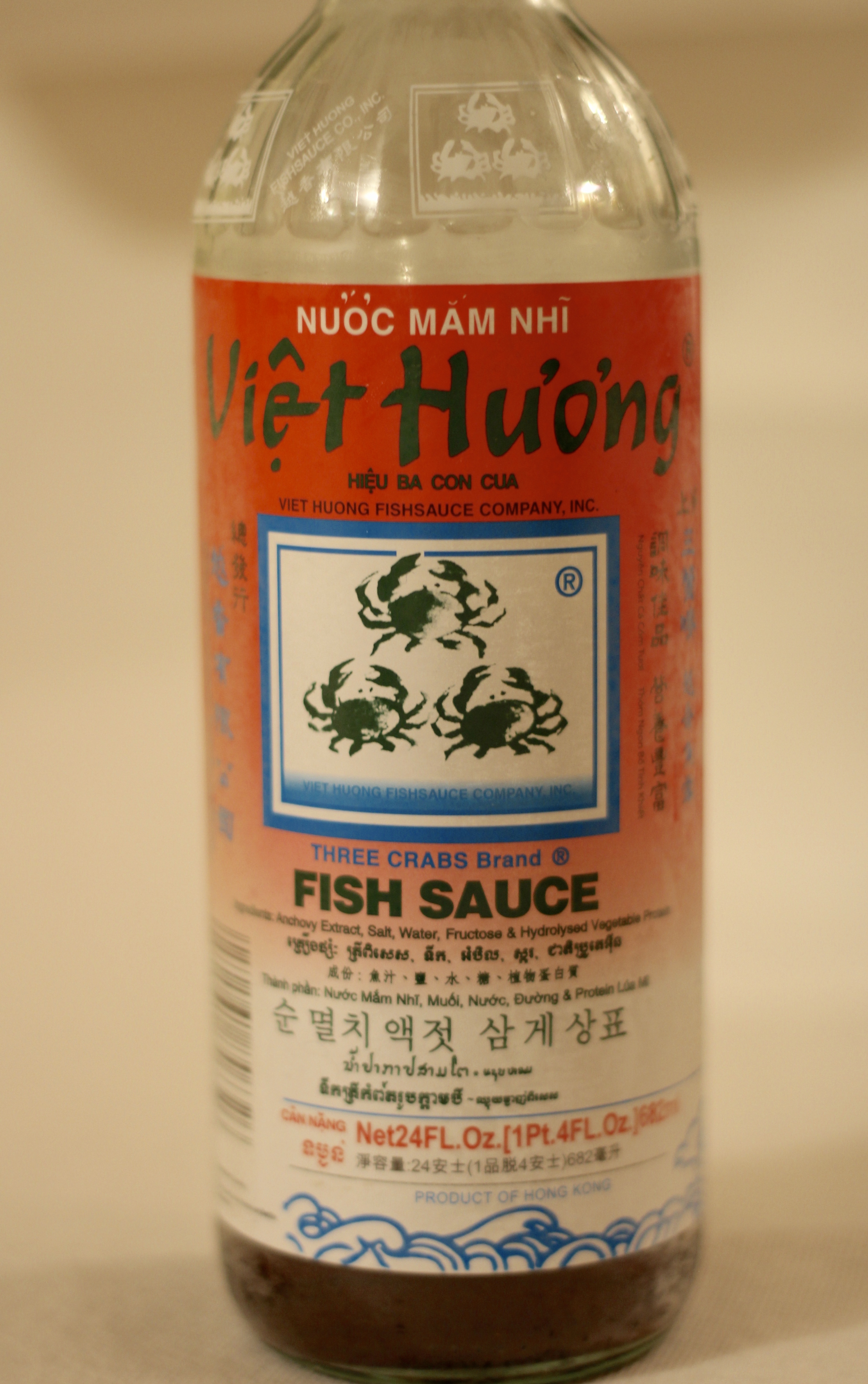 Three Crabs brand fish sauce. A big bottle is $3 at our Asian food mart, less than a tiny bottle at my local grocery store. This sauce is in almost every Thai dish we make as well.

Note: You can sub white sugar for rock sugar. I’ve done it, however, if the Vietnamese street venders don’t traditionally do that, I’m assuming its a step down in overall pho flavor. Get a huge box of this for a couple bucks at an again food market.

Broth is ready! Prepare noodles according to package in separate pan of boiling water. Never cook them in your pho broth! That will leave cloudy thickened broth, yuck. Its okay to have lots of extra cooked up as they store well in the fridge.

Step 7: Lay out toppings on noodles and fill with broth

Now you just need to strain broth into filled noodle bowls. I usually skim off a little fat and extra scum, and then hold a strainer over the bowls and pour spoonfuls of broth right into the bowl. I strain  the rest of the pot of broth usually way later after bellies are full 🙂 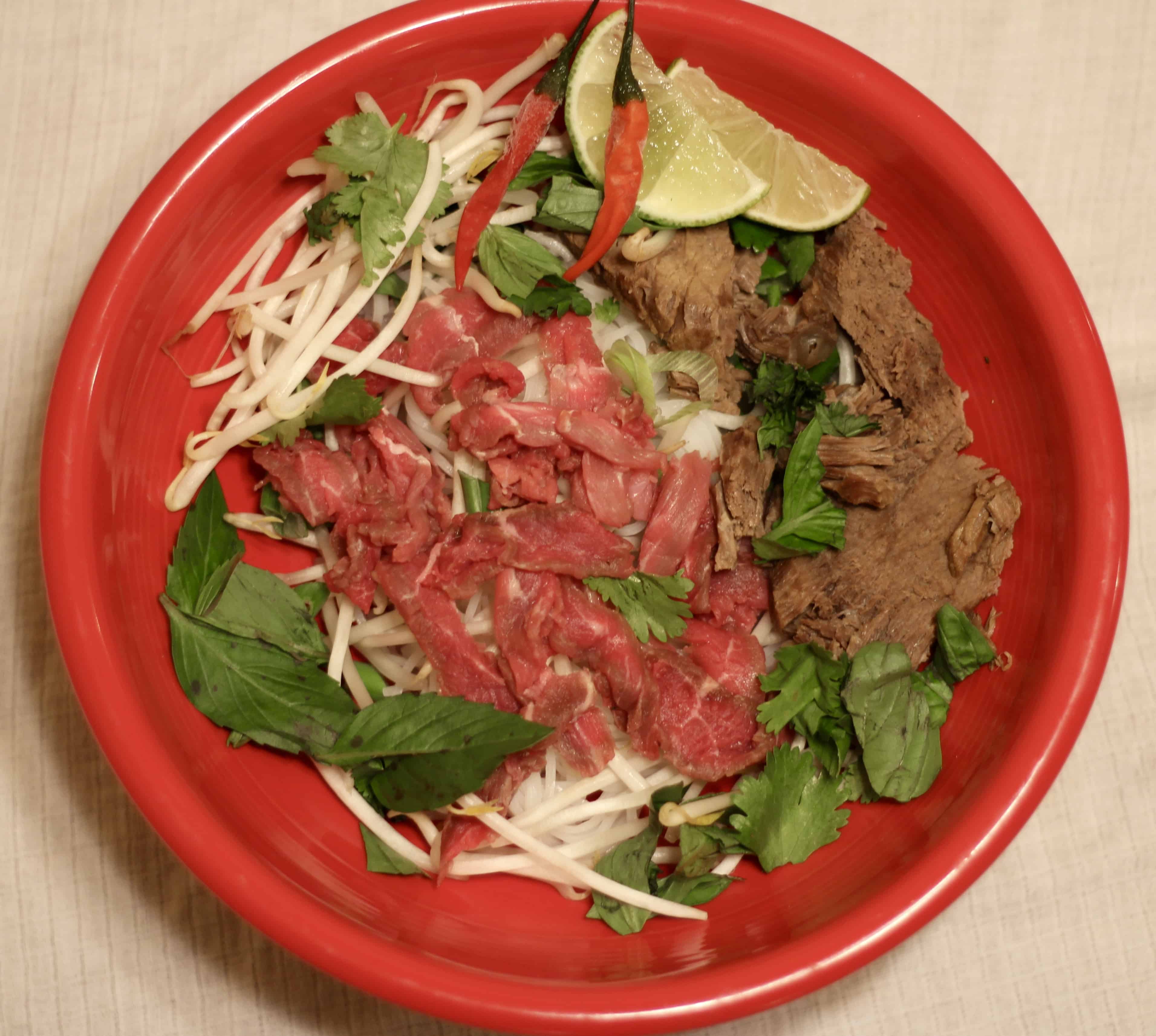 Pre filled bowl, including sirloin sliced as thinly as you can.  Sirloin must be paper thin for the boiling broth to cook all the way through. I do this step by throwing the meat in the freezer for about 15 minutes before cutting it, making it easier to slice thinly.  If you are freaked about raw meat not cooking, or if your sirloin can’t get paper thin, just blanch it in a small pot of boiling water for about 30 seconds and transfer it to the pho bowl. 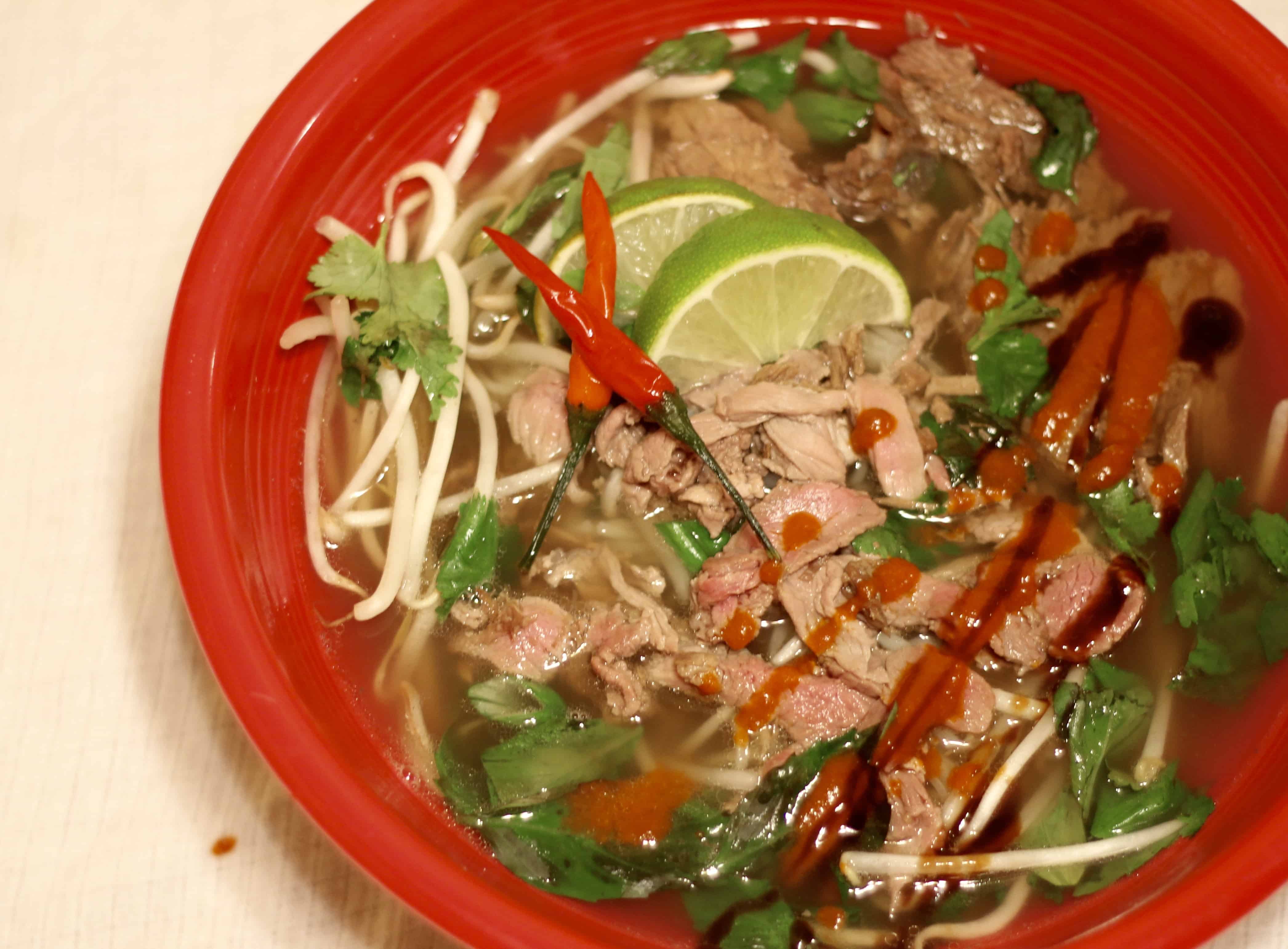 And, all that work just became worth it! By the way, I don’t actually eat whole red chilis in there, just Sriracha sauce. With both, my mouth would be on fire!

Recipes you may also love

5049shares
How to make a USPS shipping label and schedule a package pickup
← Previous
Ways To Avoid Sibling Jealousy With Each New Baby
Next →
Click here to cancel reply. 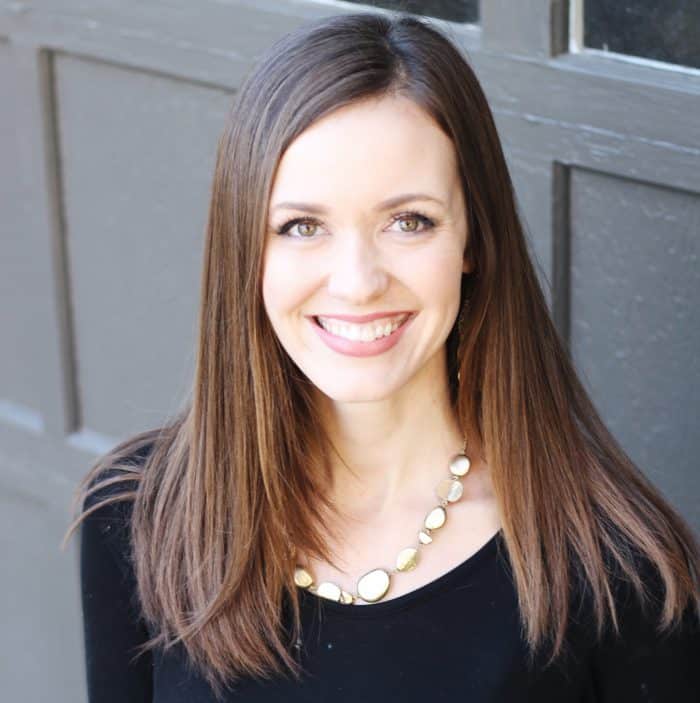