Baby led weaning foods and signs your baby is ready

For each of my 3 kids, I’ve always wondered how I would know when they were ready for solid food. Each baby has been interested at different times but all have given me the same clues they are ready to try solids.  Since they have all been breastfed it’s been important to me to know that the food they started with was nutritious since it’s replacing a part of that “liquid gold” also known as breastmilk! See what baby led weaning foods we have used and how to know if your baby is ready.
This post contains affiliate links. 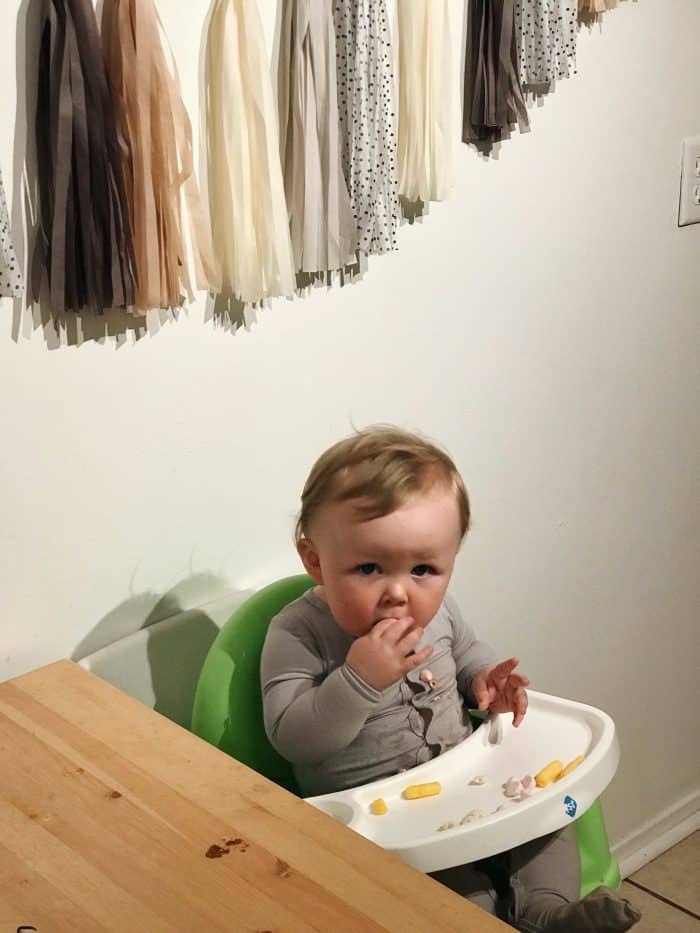 To me, it’s the most chill approach!

While it may be a new hip term, this has been going on for ages. The idea is to allow your baby to start feeding themselves soft solid foods when they show signs of readiness (so basically skipping purees).
And to ultimately feed themselves, which means being able to pick up little soft foods.

A hybrid approach is my style

We have used a bit of a “hybrid” of baby led weaning with common sense. Meaning that I allow him lots of foods and flavors but usually chew it up first, and stick small bits into his mouth rather than on his plate.
I think it allows him to try a lot of new foods sooner, and is way less messy! It’s also low pressure because most of his nutrition is still coming from breastmilk.
It looks like this:

You may also love: How to use your purse as a diaper bag

Baby led weaning foods my baby has had by age 1

He just turned one yesterday,
and because we have chewed up everything for him that we eat, he has already had things like:

As he has gotten teeth and a better ability to swallow, he can now snack on things I used to be afraid to give him like cereals or on the go Gerber snacks!

Each baby has been different and I was a more confident mom with each. I had no idea I had even tried the method “baby led weaning” until reading about it… I think it’s a pretty natural and normal progression.

I tried so hard to start rice cereal mixed with breast milk with him in hopes that he would sleep longer because I was SO SO tired and he was a huge baby waking up every 2 hours for like 6 months. But he wasn’t ready for even that, only wanted mamas milk, and his natural reflexes just made it so he pushed it out with his tongue every time.
We switched to Gerber fruit and vegetable purees later once he was interested (I can’t remember how old).  And eventually chunkier soft foods like sweet potato and avocados. We did not technically do “baby led weaning” here as I was feeding him purees with a spoon, rather than him feeding himself at a later time. But this worked really well for us, and allowed me to nurse a lot less during the day.

She had no interest in pureed food. Or rice cereals. They just wouldn’t go down. She would turn her head away and spit it out.  She is still my pickiest eater 😉  So we breastfed until she was ready for the softer food we ate at the table, which she clued us in when she wanted them by grunting and pointing.
Her first food was really chewed up meat, which is a fabulous first food due to the decreasing amounts of iron carried in breastmilk. This is more my first baby led weaning experience.

I had no time, nor interest in making pureed baby foods with 3 under 5.  It wasn’t until I felt this busy that I realized how unnecessary pureed foods are when I could just chew up foods I’m already eating.  (unless your baby enjoys it and you enjoy it too)!
At first I just started offering him little flavor nibbles from my plate after he turned 6 months.  Like a tiny crumb of pancake with syrup or a tiny, tiny chewed up piece of my meat. He would make a weird face like “what was that?!” After a while he learned how to swallow better and then I’d try a tad bigger chewed chunk. It certainly made me try to eat healthier foods so I’m not chewing up junk food.

You may also love: 8 things I’ve stopped doing to be less busy as a mom

The easiest way to transition your baby to solid foods

Pre-chew whatever you are eating that you want your baby to eat.

All the first foods we introduced were chewed up so that they could slide down a baby’s throat with a tiny bit of effort with little or no gagging at all. At first, I’d just put a tiny bit in to see if it would stay in there and get swallowed.
I was so paranoid about choking that I made everything really small and very well chewed up.
Now prechewing regular table food isn’t as glamorous as whipping out purees, but guess what? It made it so that my baby could eat other nutritious food like meat or vegetable soup I made without needing a blender and without worrying about choking. And as my baby got better at swallowing, I could put soft foods on his tray rather than chewing anything up. And no extra work for me! (I love that!).

You may also love: 20 Best Bath Toys for Toddlers

Signs your baby may be ready to try solids

It’s recommended by the World Health Organization to not introduce solids before 6 months, and then to start incorporating table foods while still breastfeeding or bottle-feeding.

Every baby is different but sometime between 6-9 months you will see them interested in table food and reaching for it.  That’s a great sign to start offering these baby led weaning foods!

Here, at meals, my baby gets whatever we make for dinner and if needed I chew it up a bit and put it on his plate. So tonight, that was rice, steamed broccoli, and chicken that I had to chew up a little for him first. He still nurses a lot so snacks are mostly for when we go out places.

In addition to the balls of pre-chewed goodness I put in his mouth or on the plate, I try and carry some easily snacks new eaters can have for outings. Especially like at church or the park when I could tell he was getting hungry but didn’t want to breastfeed right then and there.

You may also love: Start an easy one line a day journal for busy moms!

One great choice I found for on the go were  Gerber Puffs, Yogurt Melts and Lil’ Crunchies! They have a huge variety to keep babies happy and snacking smart. With babies and toddlers every little bite counts and plays a meaningful role in their nutrition as well as being able to self-feed. Gerber has good-for-you ingredients like whole grains, real fruit and yogurt, with none of the “bad stuff” like artificial flavors and synthetic colors. Plus they are easy for my boy to grab and also to chew on with his 4 teeth. And I have to say I tried them all and no wonder babies love them, I would too!

Like cut up bananas, chewed up pieces of apple, cut up strawberries, blueberries. It will depend on what your baby is able to mouth without gagging. There’s no set age I’ve found as every baby seems ready on their own time sometime between 6-12 months.

We steam broccoli, carrots, and feed him veggies in soups I make. Now that my son has 4 teeth I can give him little pieces of soft veggies and he can chew it or gum it, but when he was first starting solid foods I chewed even soft veggies first before putting it in his mouth. I think that helped him learn to swallow with pretty much no incidents of choking/gagging.

If we make some these are easy to give him pieces of!

Get your Gerber Coupon Here!